Game provider Crazy Tooth Studio launched the highly innovative game Aureus on March 4, 2021. This video slot is based on Jupiter and its lightning powers. In addition, it includes the totally new feature: CoinVerge. Will you win the jackpot in this surprising game under the watchful eye of Jupiter? Online Gambling Portal rated the game on gameplay, design and winning options.

The minimum bet per spin is set at $/€0.20 cents. The maximum amount of money you can use in one spin is $/€80. If you manage to score the highest paylines during a spin, there is a chance that you will score the potential maximum win of this slot machine: 2,431.20 times your stake! 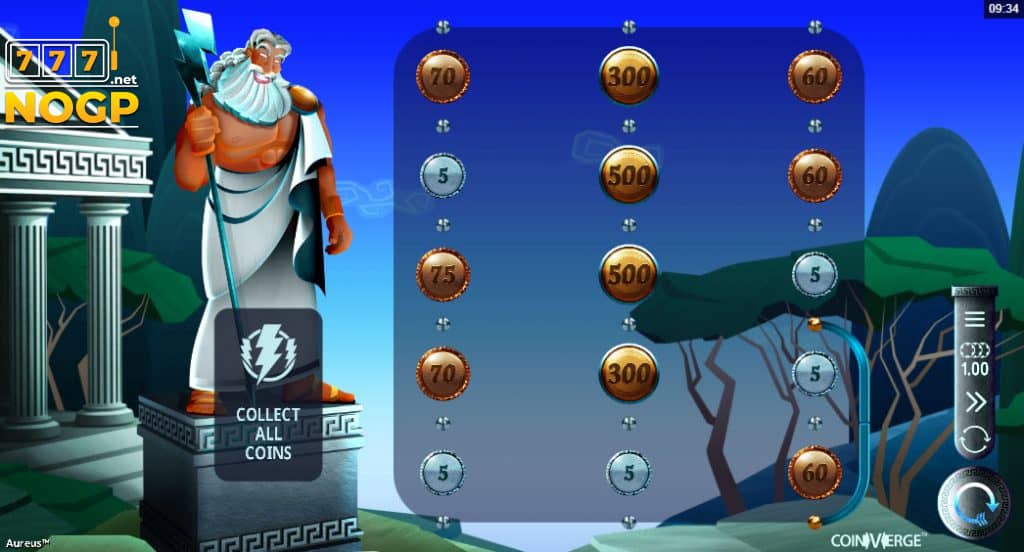 Aureus slot: How Does It Work?

The storyline of Aureus is based on the Roman supreme god Jupiter. His famous Greek counterpart is Zeus. In this game he is depicted – as so often – with his famous thunderbolt made by his son Vulcan.

Shiny coins and bright lightning bolts dominate this game, which leaves an overwhelming impression once you’ve landed on the game roster. While the graphics are relatively simple, the execution is superb.

Play Aureus at Slotnite Casino and claim your welcome bonus!
No coupons found.

The lower pay symbols are the lowest value coins on them. It starts at the silver 10. Then you have the medium coins from 100 and more. These have a golden color. The higher symbols even exceed a thousand!

Also pay attention to the multipliers, these provide extra winnings. In principle, only matching symbols can give you wins, but if Jupiter points his staff at the grid, all symbols become winning symbols. A 10 with 3000 and 850 therefore forms a 10x3000x850 payline.

The features of this game are split into three parts: the Aureus re-spin mode with various coin variants, the lightning function and the brand new CoinVerge feature. In addition, a multiplier function is also active.

CoinVerge lightning
This feature essentially changes the way Aureus is played and – more importantly – the way winning combinations are determined!
Instead of paylines, betways and clusters, CoinVerge bases its winning combinations on the use of winning brackets. Whenever a player spins the reels, winning brackets will land on the left and right sides of the reels. Should the opening and closing sides of the stirrups touch each other, a collection area is created. All symbols that fall into the collectible area are collected and their rewards are paid out to the player.

Bonuses
Building on the CoinVerge mechanism, some symbols can reward players with win multipliers and reel adjustments when they land in a collectible area. The list of bonuses includes the following:
– Multiplier Coin: it gives a multiplier of two to a maximum of five times your stake
– Upgrade Coin: All low and medium symbols are increased in value for extra high prizes
– Collect Column Coin: this feature collects all symbols that are turned per reel
– Re-spins Coin: Rewards players with two, three or even eight re-spins.
– Lightning function: This is randomly activated thanks to a chain of shackles. Jupiter will help you close the bracket chain which can then lead to high winning bonuses!.

OnlineGamblingPortal.org rates Aureus by Crazy Tooth Studio 3 out of 5 stars. Not a spectacular game, so not a spectacular rating either. But Aureus is just a very good game, which is and remains very entertaining.

The CoinVerge mechanism is really really nice and definitely adds extra spectacle to playing this video slot. Perhaps we need to get used to this new way of gaming or the mechanism needs to be further perfected. But after a while we soon longed for normal gameplay. All in all a fun game, really is something different than usual. As a result, our rating is also above average: 3/5.

What is the CoinVerge system?

This is a new winning principle, where the paylines are not formed by the position on the grid, but the position relative to the brackets that you see on the side of the grid. When they click together, matching symbols are paid out. If Jupiter includes the parentheses, every symbol inside the winning box counts!

What is the average RTP?

How many symbol positions are there in this game?

You play Aureus on a 3x5 grid which results in fifteen symbol positions. However, next to the grid you will find even more action: because that is where the brackets appear and they ultimately determine the paylines. And therefore also the winnings you score per spin!

Below are three OnlineGamblingPortal.org accredited online casino platforms where you can play Aureus for real money or try out a demo version: