If you thought that the show was entertaining and filled with excitement, wait until you try out the slot version of it. Gordon Ramsay Hell’s Kitchen is a slot game by NetEnt that takes all the fun from Gordon’s show and adds a little spice on it. Players are in for fantastic gameplay, numerous in-game bonuses, and a lot of rewards. The unique theme is what made this release so popular and the overall gaming experience does not disappoint.

Gordon Ramsay Hell’s Kitchen is a 5×3 video slot game, meaning that players will see a grid of five reels and three rows. The RTP rate of the game is 96.07%, which is somewhere around the average and the volatility rate is low. There are also a total of 20 paylines which form winning combinations for the players.

The gameplay Is simple – all you have to do is set your desired bet and then spin the wheel. Winning combinations in Gordon Ramsay Hell’s Kitchen are created from the leftmost to the rightmost reel. If you want to entertain yourself, you can set a low bet to play, but high bets are also available for players that like to risk and possibly win a reward.

NetEnt has made sure that Gordon Ramsay Hell’s Kitchen meets the modern standards. That is why this game features HD graphics and has fast gameplay. Not only that, but it also utilizes the latest technology and it is fully optimized for use on all mobile, tablet, and desktop devices. Players can access it at any time and place.

Gordon Ramsay Hell’s Kitchen has some interesting features, so let’s take a look at those as well. 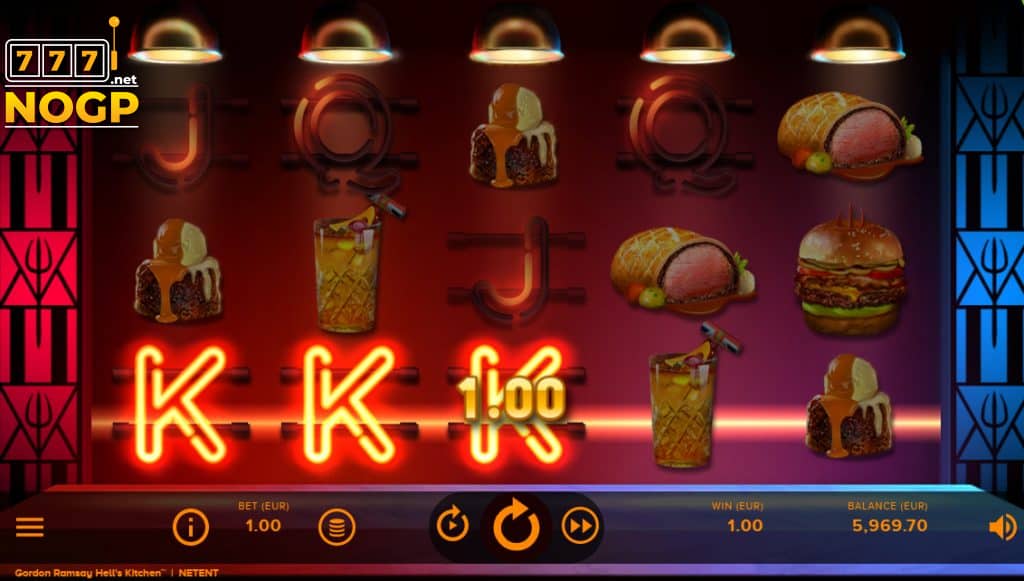 Ramsay’s Wilds is quite an interesting feature which perfectly mirrors the chef’s personality in the game. Gordon is well-known to throw various objects at chefs when he’s pissed and that character is also transcended in the game.

In the slot, Gordon throws random knives, platers, or pots at the reels and turns them into Wilds. Players can get up to 7 Wilds on the reels with this feature. 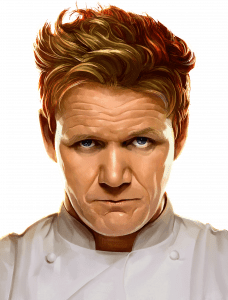 One of the coolest features in Gordon Ramsay Hell’s Kitchen is the Free Spins feature. But, this feature is quite unique. When playing with Free Spins, you get to choose a team – red or blue. The two teams then go head-to-head with you getting rewards, regardless of which team wins. Multipliers and Random Wilds also have a good chance to drop in this feature.

If your team wins during the Team Challenge Free Spins feature, you will enter the Pick-and-Click Bonus game. Here, you are presented with 15 menus; 12 of them have coin wins and multipliers, while 3 have crosses. The idea is not to hit the crosses, because if you hit 3 of them, you’re out of the game. The right menus will provide you with fantastic results.

High end regular symbols include beef Wellington, Hell’s Kitchen spicy burger, and the sticky toffee pudding. The featured Royals in the game are J, Q, K, and A. The Wild acts as the only special symbol in the game and it acts as a replacement for all regular symbols.

All in all, Gordon Ramsay Hell’s Kitchen is a very interesting game. It has unique gameplay, unique theme, and exciting features. All these factors combined are Gordon Ramsay’s recipe for a pleasant gaming experience.

Although the volatility rate is low and the RTP of the game is average, we still consider Gordon Ramsay Hell’s Kitchen to be a decent release. NetEnt has done a good job into recreating the famous show and turning it into a very exciting and fun slot game.

Can I play Gordon Ramsay Hell's Kitchen slot on my mobile?

Yes, Gordon Ramsay Hell's Kitchen utilizes the latest technology, which means that it is fully optimized for mobile and desktop use.

Is There a Free Spins feature in this game?

Where can I play Gordon Ramsay Hell's Kitchen?

Gordon Ramsay Hell's Kitchen slot game can be played at any online casino powered by NetEnt.

If you want to play Gordon Ramsay Hell’s Kitchen, you can do this at all NetEnt Casinos. Below you will find the current top three. Of course you can also try one of our other NetEnt Casinos.