How does the Finn’s Golden Tavern video slot work?

The game is played on a 5×5 playing field. Just like with Finn and the Swirly Spin slot the reels will not spin here but the symbols will appear in a spiral pattern. A winning combination is formed from a minimum of three identical symbols that border each other horizontally and / or vertically. The game is also available in the Touch® variant and can therefore be played on any device from £/$/€0.10 to £/$/€500 per spin and an RTP of 96.10%. Winning symbols will be won by the Avalanche mechanism explodes after which new symbols will fill the empty positions. Finn’s Golden Tavern has two random features, a free spins feature and a Coin Bonus feature. We will explain all features further below. 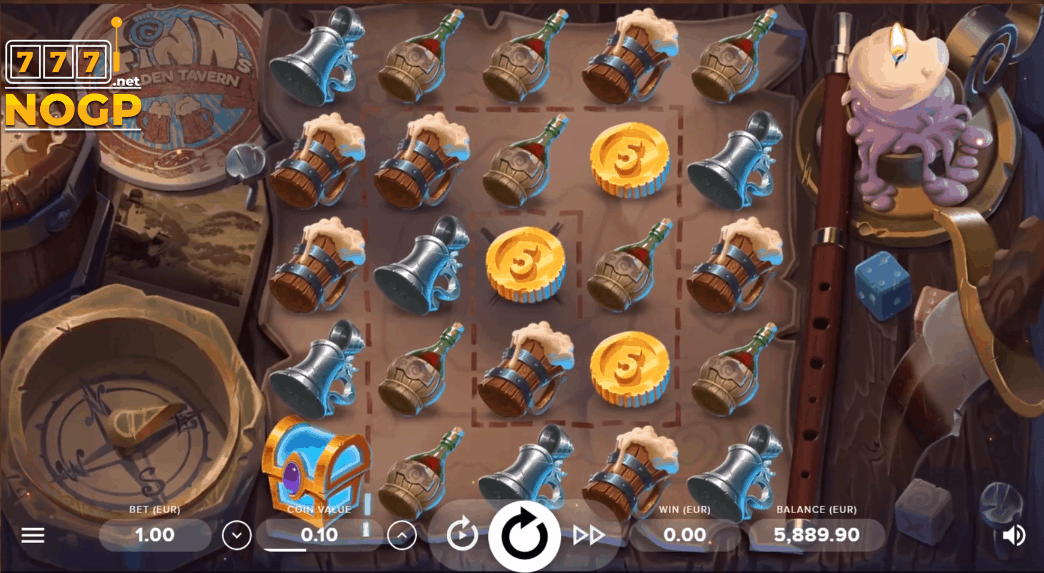 Finn’s Golden Tavern slot machine has two Random features. The first is the First Slam feature that can be activated with every non-winning spin. The second, the Random Coin feature, can only be activated once the treasure chest symbol is in the last loop of the spiral pattern.

To activate the free spins feature, the treasure chest symbol must reach the end of the spiral (ie the center of the playing field) in one spin. The player receives five free spins. During the feature, the compass located on the left side of the playing field is transformed into a multiplier meter. The multiplier is increased by 1× with every five Wild symbols that are collected.

When the treasure chest symbol reaches the center of the playing field during the free spins feature, the Coin Bonus feature is activated. A random number of coin symbols with a random value will then be added to the playing field.

Above we regularly talk about coin symbols. A value of 5, 10, 20 or 50 may appear on these symbols. As soon as three of these coins are horizontally or vertically adjacent, you have a winning combination and you get the value of the coins that make up the combination. There are also four other symbols: a whiskey bottle, wine bottle, wooden beer mug and a pewter beer mug. You can view the values of the symbols in the table below.

As we have written before, Finn and the Swirly Spin is outdated. The answer to the question whether Finn’s Golden Tavern surpasses its predecessor is clearly yes. However, the game will not be suitable for professional gamblers. The game is of low volatility and you can win a maximum of 1000 × your bet. We have seen better NetEnt slots, but Finn’s Golden Tavern slot is definitely worth playing. We give 3.6 out of 5 stars.

If you want to play Finn’s Golden Tavern slot this is possible at all our accredited NetEnt Casinos. To help you make your choice, we have placed our top 10 online casinos offering NetEnt slots below. In the list you will find top casinos like Loki Casino, No Account Casino, Wildz Casino, All Right Casino, Casumo Casino, Leo Vegas Casino, Playzee, Wishmaker or Dunder Casino. If you prefer to play at another casino, you can view the list below.