Have you always dreamed of reaching the top of the sumo world? Then we have good news. From August 22, 2019, Yggdrasil’s Yokozuna Clash video slot can be played. An online slot based on Japanese martial arts. You will be challenged by Yggdrasil to face the confrontation and defeat this supreme slot machine by collecting identical symbols and defeating your opponents. But before that happens, it is important to first learn the basics and that is why we are happy to take you into our Yokozuna Clash slot review. At the end of our review you can find our top accredited Yggdrasil Casinos where you can play this Yggdrasil slot.

How does the Yokozuna Clash slot machine work?

The game is set in Ryogoku Kokugikan, the National Sumo Hall in Tokyo and is played on a five-reel, three-row playing field and there are 243 ways to win. The game can be played on any device from £/$/€0.25 to a maximum of £/$/€125 per spin. The payout percentage (RTP) is 96.3%. A winning combination can be created in any possible way (with at least three identical symbols) from left to right and from right to left. At the bottom of the reels you see two sumo wrestlers: Riku and Haru. These sumo wrestlers ensure that the basic game becomes more interesting. They can activate a feature at any time:

There is also a Tournament Free Spins feature that we will explain below. 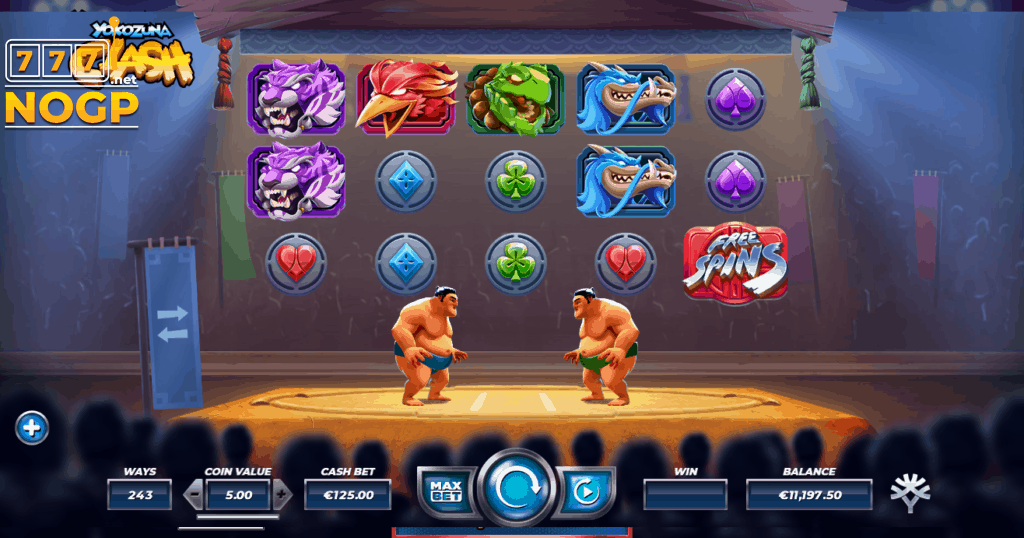 A screenshot of the basic game of Yggdrasil’s Yokozuna Clash video slot. The scatter symbol to activate the Tournament free spins feature

Yokozuna Clash’s Free Spins feature can be activated by landing a Scatter symbol on reels one and five. A random sumo wrestler of the basic game (Riku or Hazu) is chosen to fight against one of the two Free Spins sumo wrestlers (O’Connor or Daisuku).

With a winning combination on both sides, the draw is and nothing happens. When the power meter is completely left, the feature is terminated. As soon as the meter is completely to the right, the player must enter the fight with Yokozuna. When Yokozuna is defeated, the winnings of Yokozuna Clash’s Tournament Free Spins are multiplied by 2×. Every sumo wrestler also has its own random feature: Yokozuna, the opponent in the final.

Symbols and symbol value of the Yokozuna Clash slot.

In addition to the Free Spins and Wild symbols, there are eight regular symbols, four of which are high symbols consisting of red phoenixes, purple tigers, green turtles and blue dragons. The four low symbols are the card symbols hearts, spades, clubs and diamonds. The symbols and associated values can be viewed in the table below.

When you read our video slot review it sounds very complicated but in practice this is not so bad. We do recommend playing the Yokozuna Clash slot machine for free before playing for real money. This way you have the knowledge you need to beat the sumo wrestlers. This Yggdrasil slot has a unique gameplay that you won’t see anywhere else. It also meets our expectations graphically. With the various Random features that the sumo wrestlers give, the game remains fascinating. With every spin you can win up to 3450 times the bet. The Yokozuna slot machine is above our expectations and therefore this Yggdrasil slot gets 4.3 out of 5 stars. Don’t forget to share your experience with us at the bottom of this article!

If you want to play Yokozuna Clash or one of the other Yggdrasil slots, you can go to one of our Yggdrasil Casinos. That is why we have placed our top 10 below. In the list you will find online casinos that are the best in the tests of our experts. Think of casinos such as Betsson Casino, Casumo Casino, Cashmio Casino, Wishmaker Casino, LeoVegas Casino, Vera & John Casino and other top casinos. Every casino has its own welcome bonus. Read our reviews when you want to know what the casino has to offer.