In addition to the fact that 2019 will be the year of cascade slots, many software providers will also start using Megaways mechanism. Red Tiger Gaming recently announced the launch of the Mystery Reels slot in a new variant, the Mystery Reels Megaways slot. Now it is NextGen Gaming’s turn to modernize an old video slot from 2012 and to provide it with the Megaways mechanism. NextGen has chosen to rename the Medusa slot to the Medusa Megaways slot. This Nextgen Gaming slot can be played from April 24, 2019. In this article we tell you everything about the Medusa Megaways slot from NextGen Gaming. If you don’t feel like reading our slot review or are looking for NextGen Gaming Casinos, you can scroll down directly to view our top 10.

How does the Medusa Megaways video slot work?

The Medusa Megaways video slot is played on six reels. Any number of symbols can appear on the reels. Depending on the number of ways to win (which can go up to 117649 ways) there can be three to seven symbols on the reels. The game is responsive and can be played on any device from £/$/€ 0.20 to a maximum of £/$/€ 25 per spin. The Medusa Megaways slot machine uses Cascade mechanism and is also referred to as the Reactions feature.

The Wild symbol of the Medusa Megaways slot machine

The symbols that form a winning combination will disappear from the playing field and new symbols will fall down. This gives the player the chance to win several winning combinations in the same spin. There is also an extra row that will only be above reels two, three, four and five. There is also a free spins feature that can be activated in two ways. This is possible through the regular method where the payout percentage is 96.28% and the feature can also be purchased for 100 times your bet. In the latter case, the payout percentage will be higher, namely 97.63%. The Medusa Megaways slot also has a number of other features such as Medusa’s Gaze feature, Unlimited Multiplier feature, Snake Strike feature and a Temptation feature. We will explain below how this all works. A screenshot of the Medusa Megaways slot from Nextgen Gaming

When a Wild symbol stops at a position on the extra row, the Medusa’s Gaze feature is activated and Medusa will appear on the full reels under the Wild symbols. When she disappears again she will leave a random number of Wild symbols.

The Unlimited Multiplier feature will also be active. This means that with every cascade win the multiplier increases by one. The Snake Strike feature can also be activated. On the left and right side of the extra row at the top of the playing field you see two snakes that become active as soon as a soldier symbol lands. When the soldier is attacked by the right snake, the symbol will change to a Scatter symbol and when the left snake attacks the soldier, the symbol will change to a Wild. The Medusa’s Gaze feature can also be activated as described above. When the free spins have been played, the Temptation feature comes into the picture and the player is given the choice to either win or to play the free spins feature again. 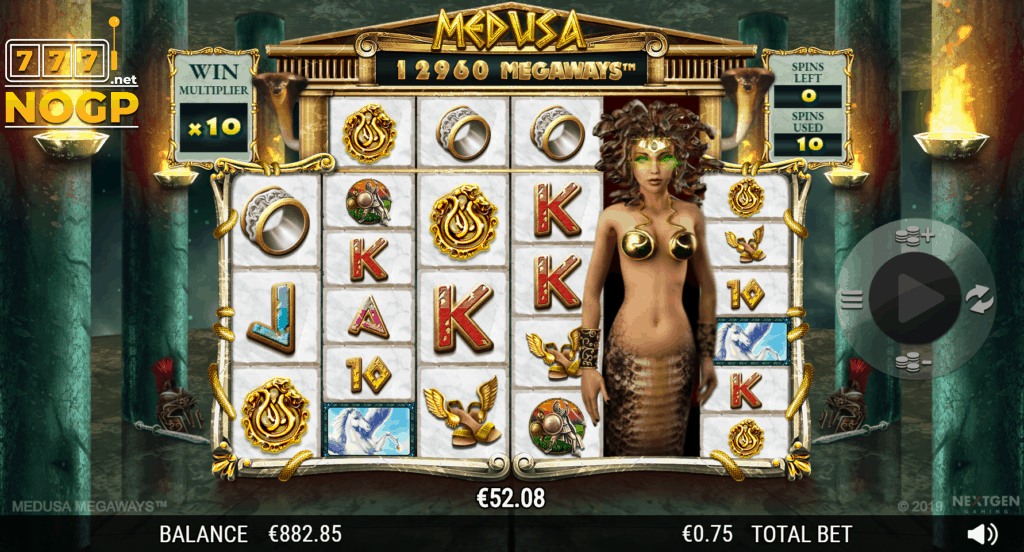 Symbols and symbol value of the Medusa Megaways slot.

In addition to the Wild and Scatter symbol, the Medusa Megaways slot also has ten regular symbols, each with their own value. There are five low symbols consisting of A, K, Q, J and 10. The five high symbols consist of talaria sandals, silver rings, golden snakes, trojan shields and pegasus horses. You can see what the symbols look like and the corresponding values in the table below. The values can be multiplied by the coin value with which you are going to play.

NextGen Gaming has fortunately chosen to make the Medusa Megaways look as much as possible like the original. We always find video slots with a theme of Greek mythology interesting. This time Medusa (the woman with the hair of snakes) is central. We would like to give in to play carefully on this NextGen Gaming slot as it is of high variance. There is a lot to win (up to 50,000 times the bet) but there is also a lot to lose. The many features keep the video slot exciting and the graphics look good. If we look at the total picture, the Medusa Megaways gets 3.8 out of 5 stars. We therefore prefer the Megaways version instead of the original.

The Medusa Megaways slot can be played at any Nextgen Casino but we recommend that you do so at the Nextgen Gaming Casinos that we have accredited. Our favorite casinos where you can play this Megaways slot are Gutz Casino, Casiplay Casino, Leovegas Casino and Mr Play Casino. If you prefer to gamble somewhere else, you can view our top 10 below.